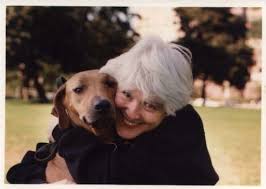 My name is Barbara Sawyer Brown, and I have dedicated my life to one of the most exceptional breeds of dog in the world–the Rhodesian Ridgeback. For over 40 years I have tried to breed Ridgebacks which exemplify the Breed Standard, are happy, healthy dogs placed carefully in loving homes, and live up to the history and heritage of these beautiful dogs of southern Africa.

Be it by coincidence or design, the power, strength and, yes, feline agility of the Rhodesian Ridgeback is evident from the moment he takes his first steps. No other hound in the world today is expected to face such an awesome quarry–therefore, as a breeder of the mighty African Lion Hound I do not suffer weakness in any quarter lightly! Stamina, Quickness, Courage and Intelligence are the essence of this breed. No Ridgeback, in fact, no breed of dog is expected to attack the most formidable of all jungle carnivores; the Rhodesian Ridgeback’s job is to find, course and hold the lion at bay, waiting for the hunter. Whether on the end of a show lead or just playing in my back yard, I know that the neuromuscular superiority of a great Rhodesian Ridgeback is unsurpassed in the canine world.

My philosophy of breeding RRs is simple: all it takes two Ridgebacks that are good examples of the breed. Sounds simple, eh? In practice, it’s not that easy! They must conform to the Standard, and have been tested for Canine Hip Dysplasia and Elbow Dysplasia; their hearts, thyroids, patellas and eyes have been tested and all have been found free of genetic irregularities, and have certificates to prove that they have passed these tests. They are Champions in the show ring, and/or have other performance titles. Their pedigrees must compliment each other, because you are not breeding just two RRs, but every RR in both sides’ pedigrees. And even after all this, the breeder must look at her Ridgeback judiciously and with a detached eye. Will breeding this Rhodesian Ridgeback really add anything to the breed? Will the resulting puppies be at the very least as good as the mother and father–and optimally, better that the mother and father. What about temperament? It is inherited, and no RR–make that no dog of any breed–should ever be bred if it has a bad temperament!

Earlier on this page, I said that I have dedicated my life to this breed. Kwetu has the distinction of having bred the most Best in Show (BIS) Rhodesian Ridgebacks in the United States. Kwetu dogs have been used as the foundation of many kennels, and are found in the pedigrees of Champions all over the world. However, the most important fact about my kennel is that Kwetu Rhodesian Ridgebacks have brought the love and companionship of happy RRs to many families.

If, after looking through my website, and visiting some of the many links here, you would like more information, please write to me. I am very happy to answer your questions, and talk to RR lovers around the world!